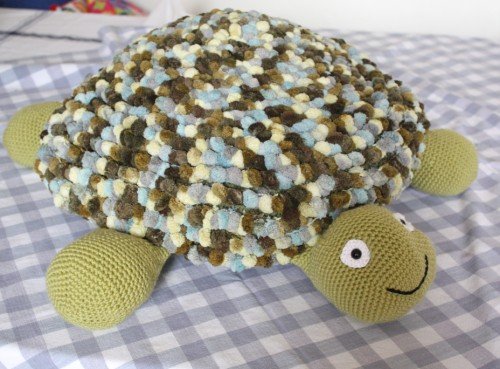 Here is Toby Turtle just before he was sent off to Inside Crochet Magazine. He came into being from  a conversation that I had with Editor Claire. I think both of us might have played on the same sort of turtle floor cushion as children.

I really wanted to design something which used surface crochet and a pom pom yarn. I started off wanting to create a sophisticated floor ‘pouff’ in grey and lime. Very Living etc. But as I worked up the swatch to send to Claire I realised that the little dome I was making would make a very cute tortoise/turtle. I happened to mention this and Claire said, ‘Actually make that! So together we had a lot of fun. 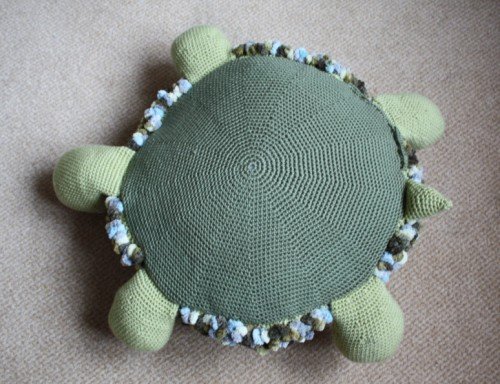 Firstly it is worth mentioning that his head, limbs and body all are crocheted first in an aran yarn. It is both robust and hardwearing. The top of his shell is double crocheted in rounds through the back of each loop. Then the pom pom yarn is crocheted on top, catching the yarn between the pom pom on alternate double crochet stitches. I have done a small picture tutorial here if that helps.

I have weighed his paws down with beads. If you are afraid of making toys because of the embroidery features – don’t be. The wonder of home made toys is their individuality. What I have learned over time is that if they are made with love, children find the personality of each creature automatically. 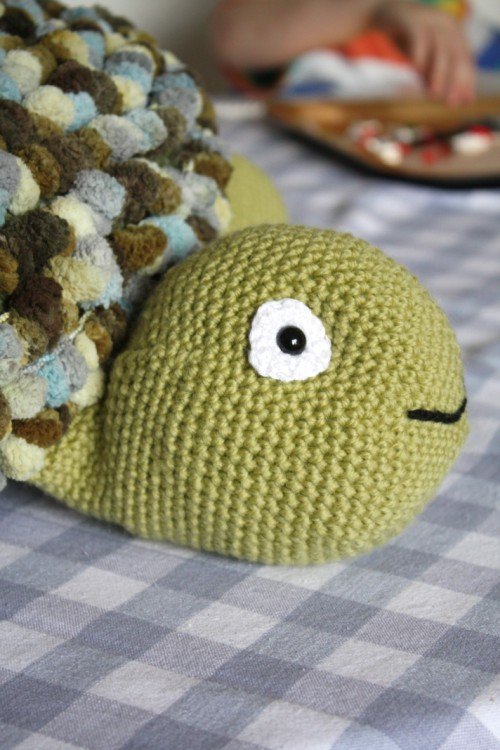 The biggest problem with Toby was that he was just too darn cuddly. Little B loved his soft shell so much that every time I turned round he was lying on him with his face buried in the pom-poms. I quickly bundles Toby into the boot of my car and sent him to the magazine within hours of finishing him.  I hope you like him too x 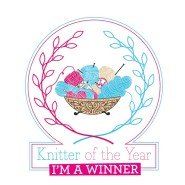